Despite being a child of the ’80s and ’90s, I actually did get a fairly steady diet of sitcoms from the ’60s thanks to Nick at Nite. Catering to boomer nostalgia, the channel used to take up the nighttime air time after Nickelodeon’s kid-geared programming, so I wasn’t the only couch potato-in-training of my generation who managed to get exposed to yesteryear’s sitcom hits.

My favorite sitcoms, of course, were the ones coming out of the ’60s fad for outlandish sitcom premises: I Dream of Genie, Gilligan’s Island, and, of course, Mr. Ed, the story of a married man in Los Angeles named Wilbur and the horse that talks to him alone. And, no, you can’t even joke à la Jon and Garfield that Wilbur is hallucinating that Ed can talk because, yes, it’s canon that Mr. Ed can talk to other people; he just doesn’t want to for reasons…although you could probably still make the argument that Wilbur suffers from a particularly complex case of dissociative identity disorder.

The show’s running gag is that Mr. Ed, despite caring about Wilbur, apparently enjoys making him appear as deranged as possible to his wife and neighbors. This is made somewhat easier by the fact that Wilbur is hardly the post-World War II American masculine ideal. Actor Alan Young, to liberally paraphrase one of the show’s creators, was brought on to portray Wilbur as the sort of guy who would talk to his horse. If this does sound kind of like the relationship of Jon Arbuckle and Garfield, albeit with Jon supposedly not being able to understand Garfield, well, you’re not the only one. Maybe instead of dissociative identity disorder, it’s a demon that possesses animals and preys on socially awkward men?

That Mr. Ed is at least occasionally malevolent is definitely the premise of this adventure. Mr. Ed went running off around the neighborhood (did that kind of thing happen in the suburbs of southern California during the ’50s and ’60s?), causing Wilbur to miss a town meeting his wife Carol wanted him to attend. Mr. Ed is upset that a new member of the neighborhood, Clint Eastwood, has an alpha-male horse Midnight who is having an affair with his fillies. Note the plural. I guess being non-human means Mr. Ed is totally unrestrained by the mores of ’50s/’60s American television, given that the show makes it very clear that he basically has a horse harem.

Clint Eastwood gets further into poor Wilbur’s orbit when Carol retaliates for Wilbur’s disappearance by nominating him in absentia to head a committee for raising money for a neighborhood youth center. His only ally is his neighbor Roger, who was also drafted by his wife Kay. So Wilbur is not only stuck with a wife stewing with rage, but he is stuck with having to write a script for a play to put on to raise money.

You probably see where this is going already. What you might not predict is that Mr. Ed can somehow use a phone and dial, a convenient loophole to his own “only speaking to Wilbur” rule. Exploiting the fact that, at the time, neighborhoods often shared one phone line, Mr. Ed ruthlessly pranks Clint Eastwood and sabotages his conversations with a studio executive and his girlfriend, costing him a movie role and a relationship.

Suspecting Wilbur, a shockingly young Clint Eastwood is about to beat him up. In what I thought was the episode’s funniest bit, a star-struck Roger is somewhere between being nonchalant and outright egging Eastwood on about the whole thing. Alas, both Roger and the viewer is bound to be disappointed. Clint Eastwood is not only easily talked down from violence, but readily volunteers one of his old Western scripts to provide the basis for the fundraising play. Luckily, Carol getting enlisted as a hot frontier town lady also finally gives her the push needed to patch things up with Wilbur. 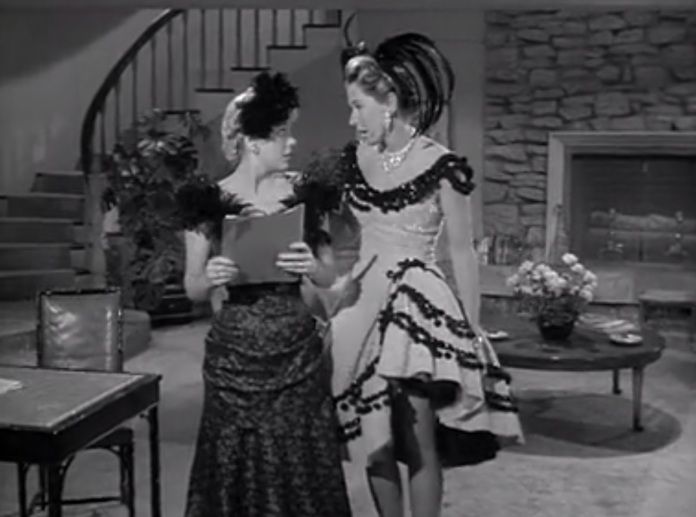 As for Mr. Ed’s problems…well, they get resolved pretty neatly through the power of convenient coincidence. It turns out that Clint Eastwood sold Midnight to a studio and got a hot, new filly, whom Mr. Ed promptly sets out to seduce. A promising subplot, in which Clint Eastwood volunteers to train and “discipline” Mr. Ed, doesn’t even really get off the ground once the whole plot is resolved!

It is interesting and a little disconcerting to see a very young Clint Eastwood, still mostly known just for his starring role in the TV Western Rawhide at the time of this episode, but how much you get out of this episode, and any episode of Mr. Ed really, depends on your taste for jokes like:

“Then why does he call his show Rawhide?”

If you belong to my generation or younger, it’s also weird how much shows like this were completely and fatally deconstructed by shows like The Simpsons, namely for their tame jokes and the easily resolved conflicts and the lack of character growth. Experiencing the satire before the subject of the satire definitely gives shows like this a kind of unintended veneer that doesn’t exactly spoil them, at least for me, but also definitely doesn’t really make it easy to enjoy them on their own terms.

That said, it’s usually not fair to write off sitcoms from this era as being entirely toothless, and this episode is no exception. The show’s running gag about the quiet desperation that is the Addisons’ marriage actually has a tiny bit of a Who’s Afraid of Virginia Woolf? vibe:

“Forget you’re married to him. Pretend you love him.”

“You know you and Roger are crazy about each other!”
“Yeah, but that’s the only thing holding our marriage together.”

I genuinely did laugh at those jokes. It’s just that, if you do choose to dive into Mr. Ed, it’s best to ignore the moments like when Clint Eastwood’s housekeeper helps in the rehearsal by playing a Native American. I try to argue that sometimes different times aren’t as different from our own as we assume…but sometimes, they really just are.