Well, okay, that was a bit of a shameless clickbait-y headline. Of course, with the TGIF line-up long-runner and militantly G-rated show Family Matters, which was in many ways the Designing Women to Full House‘s Golden Girls, nothing really terrible happens to the Winslows. Still, they come weirdly close to being legit slasher movie kills, but…well, we’ll get to that. 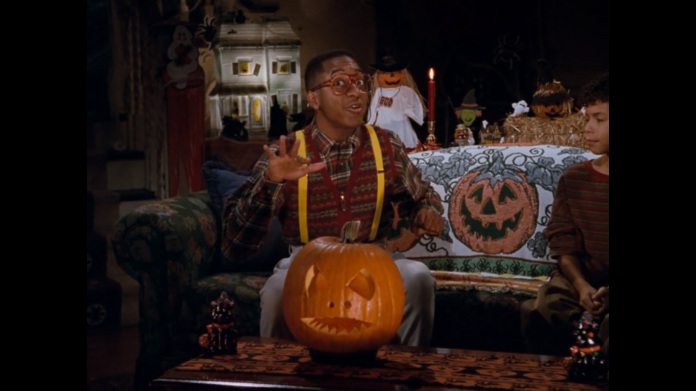 Maybe the episode itself acknowledges how much it’s not quite removed from a typical ’80s teenage massacre flick by giving the audience a content warning of sorts from Steve Urkel, who has by this point, the eighth season, long replaced the Winslows themselves as the star of the show. The following 20 minutes might be a little spooky, especially for those of you tuning in after Full House! In the show’s defense, though, if this seems quite lame, the much edgier (well, okay, at the time) Simpsons did the same thing for their Halloween episodes.

Despite Steve breaking the fourth wall to give a little warning to viewers, the Halloween special kicks off like many a Family Matters episode, with Steve using a new interest as a vehicle to irritate the Winslows. In this case, it’s a ventriloquist dummy that’s made to be a replica of him. Steve’s dreams of becoming a ventriloquist are dashed by the lukewarm response of the Winslows, who are probably wondering why a super-genius who can clone humans, cracked the secret of time travel, and developed exploding vegetables for the US military is bothering with an archaic type of showbiz.

Despite his genius, Steve just quickly wishes that his dummy could talk. His wish gets granted, but in the problematic form of apparent demonic possession.

Okay, we don’t really know what happens to create “Stevil”, the sociopathic Steve ventriloquist doll, but that’s not important: it’s time for the Winslows to fall prey to the diabolical faux-Urkel! Laura is split into three parts and scattered across the Winslows’ kitchen cabinets, Harriet Winslow’s head ends up being the centerpiece of a giant jack-in-the-box, the two young Winslow kids are chased down by Stevil in a car while they’re trick-or-treating, and Eddie Winslow is dragged into a chimney, and, in a moment that probably did actually freak out some of the show’s kiddie audience, an unresponsive Carl is used as a human dummy by Stevil.

I mean, don’t expect a genuine Child’s Play à la dead Winslows. Most are still talking and seem only mildly disturbed by their “deaths” (even if Carl never moves on his own and Eddie’s ultimate doom is never revealed). But honestly, Stevil is pretty explicit about wanting to rub out the Winslows because he despises them for being, essentially, a TGIF sitcom family (hey, Stevil, if that’s really your beef, want to stop by the Tanner household before you call it a night?) Also it doesn’t take much of an imaginative leap to suppose that, say, poor Harriet really has been decapitated, had her head hollowed out, and was turned into a novelty toy. Whoever wrote this episode wasn’t a stranger to horror movie death scenes, is all I’m saying.

But don’t let me fool you into thinking this episode is more bizarre than even by the standards of the adventures of Steve Urkel. The events of the episode all turn out to be a dream, albeit with a “false awakening” during which Eddie tries to lobotomize Steve with an egg-beater. Also, as per TGIF policy, most of the jokes were probably ancient when they were first written down in papyrus (although I was legitimately impressed we did get this less than family-friendly remark from Eddie: “The only doll I want sitting on my lap can talk on her own!”), although as always it still managed to be a cut above the diabetes-causing sugar pap that was Full House. I will admit, though, the bit where Steve tries earnestly to seal his bedroom door with Scotch tape did get a real laugh out of me.

The best part, though, is that this episode got a sequel in the show’s ninth and final season, where Stevil returns alongside an evil ventriloquist dummy doppleganger of Carl, Carlsbad. Maybe we’ll get to that one next Halloween (which, at the rate I’ve been posting this year, will be two or there posts later). 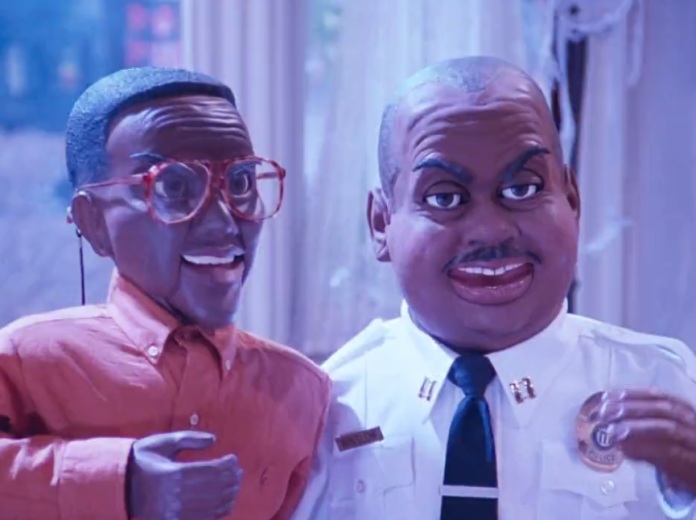