It seems like something you’d skim off fanfiction.net on a lazy evening but, no, this was actually professionally produced as an episode of The Real Ghostbusters in 1987.

And, believe it or not, it’s pretty faithful to Lovecraft – more so than a Cthulhu plushie, in fact.

Okay, so the title of the episode is “The Collect Call of Cathulhu,” which I guess was spelled that way apparently because Lovecraftian orthography was too much for the show’s middle-school-aged target audience.  Otherwise, the Necronomicon makes its usual appearance as the plot McGuffin, Egon and Vankman make a trip to Miskatonic University, the Ghostbusters are threatened at one point by Shoggoths, and a cult appears chanting “Cthulhu R’lyeh wgah’nagl fhtagn” (although they incorrectly throw in a ” Iä!  Iä!”, which as everyone knows is properly reserved for Shub-Niggurath).

The episode begins when Miskatonic University, whose administrators have clearly learned nothing from the Wilbur Whateley incident, loans a copy of the Necronomicon to the New York Public Library.  The book is promptly stolen and the Ghostbusters get involved, especially because Egon and Ray are concerned that the book will be used in a ritual to summon Cthulhu on the night the “stars are right” for the first time in decades.  Of course, the always genre savvy Venkman stuns Ray by correctly guessing that the special, rare night will be very soon. 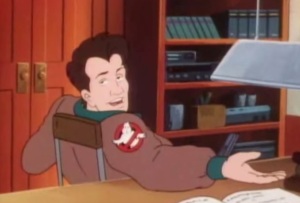 (And, yes, this is one of the episodes where Venkman was voiced by Lorenzo Music, which naturally only gives rise to thoughts of a Garfield and Friends/Cthulhu Mythos crossover…).

Egon and Venkman team up with Alice Derelith, who is probably the smartest Lovecraft reference out of the whole episode.  This isn’t so much because she was named after Lovecraft’s “successor” August Derelith, but because she really does come across as the perfect Lovecraftian heroine – if Lovecraft was ever interested in writing women, which he wasn’t.  Still, she basically is a Lovecraftian hero in female form.  She wears gloves all the time as a result of an unspoken neurosis, is fairly uptight, and is completely oblivious to Venkman’s less than subtle flirtations as if the very concept of sexuality has never crossed her mind.  That’s Lovecraft all right.  The only thing missing is that she doesn’t go insane or think she might go insane or resigns herself to one day being murdered by cultists at the end. 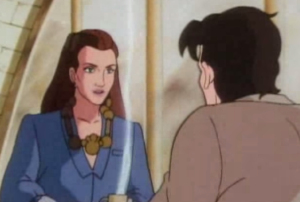 Like with so many Lovecraft homages, this story puts H.P. Lovecraft himself into the same reality as his creations.  It turns out that in the Real Ghostbusters universe Lovecraft “and other writers” made their careers out of creating stories based on what they knew about the Necronomicon.  I’m a sucker for that kind of thing, although my inner nitpicking nerd can’t help but wonder what the hell they would be thinking popularizing knowledge about a book that has the potential to destroy humanity ten times over. Anyway, this all leads to a cute scene where Ray leads the other Ghostbusters into a fact-finding expedition into the paperback and magazine collection of an old neighbor of his, and the method for stopping Cthulhu is found in an issue of Weird Tales.

He does shrug off the Ghostbusters’ proton beams like shots from water pistols.  However, inspired by the story “The Horror from the Depths” from Weird Tales, they defeat Cthulhu by electrifying a roller coaster he’s attacking to get at Venkman.  It’s implied that Cthulhu has just been banished, not destroyed, but nonetheless there’s no way this would have been an ending Lovecraft would have signed off on.  Then again, he’d probably be far more disgusted by the Hello Kitty/Cthulhu hybrid tote bags for sale.

Weirdly enough, there actually is an August Derelith and Mark Schorer story titled “The Horror from the Depths” which, according to John Harms’ and John Wisdom Gonce’s The Necronomicon Files, this episode’s screenwriter Michael Reaves had not even known existed before writing “The Collect Call of Cathulhu.”  He simply made up a title that he thought sounded Lovecraftian.  Although the actual story does not have Cthulhu thwarted by an electrified roller coaster, or making an appearance at all, it still does have some coincidental similarities.  The story does like the episode have an appearance by the Spawn of Cthulhu and a climactic scene at the Chicago World’s Fair in lieu of Coney Island.  Perhaps writers are tapping into some dark arcane knowledge when they channel the Cthulhu Mythos.

If that’s the case, it’s a shame I long ago lost that paperback copy of the Necronomicon that I got in ninth grade!

Here’s a bit of incredibly worthless trivia.  Technically the first of the Ernest Goes To… comedies so ubiquitous on ’90s cable wasn’t Ernest Goes to Camp, but the ultra-obscure and not-even-a-camp-classic Dr. Otto and the Riddle of the Gloom Beam.  Knowing all about this movie should impress your friends more than knowing the orbital velocity of Neptune or facts about Mongolian warfare.

To be honest, it does only barely qualify as an Ernest movie, despite an intro starring Ernest added to some VHS copies of the movie after the theatrical release of Ernest Goes to Camp.  And no matter what the incredibly deceitful promotional material says…

Our favorite bumpkin Ernest P. Worrell does show up, but only for about five minutes of screentime.

Still, this was the first feature film that wasn’t just a collection of shorts that pulled the spotlight toward the characters Jim Varney created during his stints as an eclectic national advertising pitchman for fast food, dairy products, amusement parks, and even natural gas.  It’s not like any of the Ernest Goes To… movies.  Actually…it’s not like most movies in existence.

What can one say about a movie that has Jim Varney playing a heavily German-accented mad scientist garishly dressed like an old 1940s serial villain, who happens to have a moving human hand on top of his head for no reason?  And who invents a “gloom beam” that can disrupt all financial transactions from the stock exchange to the really old-timey credit card machines those of you old enough to remember Ronald Reagan as President might recognize?  And has as a sidekick a robot that shows its emotions through basically emoticons on its face? (Never let it be said that the movies I write about aren’t forward-thinking).  As you might expect, the whole plot, especially the fact that Dr. Otto has an “electric coffin” that (as explained in one bit of exposition so clunky I had to wonder if it was a deliberate joke in of itself) can completely alter his appearance, is there to justify Jim Varney showing off his different personas.

And if there ever was a plot so thin it could be described as wet-tissue-thin, it’s this one…

The most story we get is when we’re introduced to our designated hero, Lance, and his assistant Doris, who is really the Penny to his Inspector Gadget.  They’re hired by a bank to stop Dr. Otto before he can pull off destabilizing the entire global economic system. The only clue to Dr. Otto’s whereabouts is the convoluted titular riddle that Dr. Otto delivers over television in true supervillain fashion, but even he admits off-camera that it’s a lie.  I watched this movie twice just to write this post and I still have no idea why the protagonists go to the places they do, and why Dr. Otto ends up basically knocking them down a broken elevator only for them to end up in his lair. Really, most of the movie is just Lance and Doris (who are later joined by a treasonous henchgirl of Dr. Otto’s, Tina) running into scenario after scenario run by an evil character of Jim Varney’s and escaping, usually through blind luck or Doris’s competence.  We get pirates chasing after a Swamp Thing-esque garbage dump monster (…don’t ask), the bed n’ breakfast from Hell, a homicidal millionaire with the truly great name of Guy Dandy, and, perhaps my own favorite, a Daycare Mercenary Training Camp.

When we’re in the company of just Lance and company, the movie more or less grinds to a near-halt.  I get the joke they’re trying to make, that Lance is purely the hero because the script says so, and in the movie’s own world he is just an empty platitude-spewing moron incapable of having deep thoughts, much less deep convictions, and is criminally inept and self-absorbed.  But while the idea is obvious the execution fails to leave a mark, even though the movie even tries to build a shared backstory (albeit one that seems to exist just to set up a few gags and pad out the running time) between Dr. Otto and his would-be nemesis.  Jim Varney’s Dr. Otto is just too strong and distinctive a presence, and even though he’s supposed to have an opposite heroic (or even just “heroic”) number he’s really just left without a foil throughout the entire movie.

Doris could have been that foil, maybe, but she’s stuck with the role of just being the sole straight “man” in a deeply, deeply weird movie.

When Lance and Doris are on-screen, the humor settles for just being blandly strange (like one banker asking Lance what his favorite animal is, when prompted for questions, because…it’s zany?).  Now when Jim Varney steals the stage…well, I can still see why even the powers of the Internet haven’t decreed that this one should be a cult classic, but, honestly, Varney just makes the movie all by himself.  True, Ernest Goes to Camp netted Varney a Golden Raspberry and even at the height of their popularity the Ernest Goes To… movies were ruthlessly mocked by the likes of The Simpsons, but it shouldn’t be a controversial statement to say that Jim Varney was extremely talented.  It’s not an exaggeration to point out that Dr. Otto, the crazy glam rock scientist with a hand attached to his head, is the only character who actually feels like…well, a character.  Plus, I don’t know if it’s Varney’s delivery or if his jokes just happened to be better, but I really did crack up when Dr. Otto was asked what he wanted the target of the gloom beam to be and he solemnly replies, “Cincinnati, of course!  The financial capital…of southern Ohio.”  Or when he crows, “It’s my lowest moment! It’s all so deliciously unclean.”

Outside the glorious Dr. Otto himself, my favorite scene is when Lance and company stumble across a bed and breakfast operated by “Aunt Nelda.”  In context, it’s a little too farcical;  as much of an idiot as Lance is made out to be, you think even he’d at least notice that everyone they’ve encountered has tried to trap them and kill them. But this one scene manages to present the movie’s low-key, skewed darkness, with Aunt Nelda regaling her guests with stories of her dead son Hymie while abusing the very badly disguised robot servant.  Also it’s nice to have a villain who gently advises her victim – “You gotta trust those instincts, honey” – just after she falls for the trap. 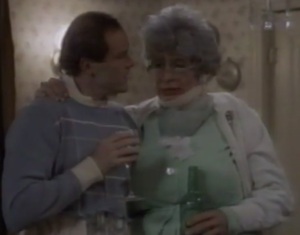 Nonetheless, one scene can’t make a movie, and Dr. Otto and the Riddle of the Gloom Beam is a hard sell, especially when Jim Varney isn’t on the screen.  But I will say it is worth watching, since at least it offers a glimpse into another timeline where Jim Varney was able to do some less mainstream and even darker material than the Ernest Goes To… series.