So there was a minor controversy last year when Sight & Sound and a legion of polled film critics decreed that Vertigo had usurped the place of Citizen Kane as the greatest film of all time.

They are wrong on both counts, by any and all truly objective standards.

What is the Greatest Film of All Time?  Not Rashomon, not 2012: A Space Odyssey, not even Glen or Glenda, but…Never Too Young to Die.

You know those movies that sound too fantastic or bizarre to ever have had a chance to even exist?  Like Salvador Dali’s unmade movie for the Marx brothers or Ilsa vs. Bruce Lee in the Devil’s Triangle?  This is one such movie, except you can actually watch it.  You’ve got pre-Full House John Stamos as an action hero, Prince’s protegee model/singer Vanity (who nonetheless didn’t even appear on Purple Rain), and, best of all, Gene “KISS” Simmons as a hermaphrodite terrorist/gang leader/biker bar performer named Velvet von Ragner.  I don’t care what you think of Gene Simmons; there’s no part of that description that isn’t fantastic.

Anyway, Velvet von Ragner (God, I even love just typing that name) somehow has this cult of Mad Max-style bikers out in the desert (!) and is planning to poison the entire water supply of Los Angeles for a ransom.  Unfortunately for his humble ambitions, he’s being tormented by his nemesis Drew Stargrove, played by George Lazenby, whose every line and movement just says, “Yeah, I’m here just because I was the only Bond they could afford, what are you gonna do?”  The impression that he’s a discount Bond is only cemented by the fact that Stargrove can’t even get some plastic explosives to stay stuck to a wall – it’s a moment that I guess is supposed to be comic but instead makes you wonder if Stargrove was responsible for President Kennedy’s security – and by the fact that we learn that Stargrove, once he had a copy of the computer disc with the information that Ragner needs to break into the LA water supply, sends it to his son Lance instead of destroying it.  And, no, nobody ever thinks of destroying this MacGuffin, even though the heroes really have every reason to do so.  Nor, for that matter, does Ragner just try to go back to the original source of the information, whatever or whoever that was.  Oh well, as long as the heroes and the villains are both equally inconvenienced by the God of Plot Convenience…

Anyway, as Stargrove pere struggles to foil Ragner, Lance (John Stamos!) is at college, perfecting his gymnastics.  His gymnastics have no point here besides explaining (poorly) how he can fight later in the flick, but, you know, this is the era of Gymkata, when gymnasts can defeat any Schwarzenegger or Stallone.   Meanwhile Stargrove pere acts only mildly perturbed that one of his partners has been killed and the other apparently betrayed him to Ragner.  Also he does what I suspect was an ad lib:   “Oh come on, this is stupid.”  He doesn’t seem to put up much of a fight when Ragner blasts him with a shotgun, unless awkwardly walking into the camera counts as a defensive move for action heroes.

Here actor George Lazenby conveys his desire for his paycheck.

You cinema savvy readers might already be thinking, “So, yeah, Lance never knew about his father’s real career, and is distraught over the news of his death especially because he always suspected something, but he gets dragged into his father’s old life because blah blah” and, sure, you’d be exactly right.  But even so Never Too Young to Die throws us a curveball in that Lance already has a friend/roommate in college who helps him out with hi-tech gadgets and is a match for Q in the Bond franchise because he’s…uh, Asian, apparently.

Another of Lance’s new allies is Djanga (Vanity), a former “colleague” of Stargrove pere who doesn’t really get a backstory beyond her insistence that she was never his Bond girl.  Even that tidbit of a backstory is just there to make it less creepy when Djanga inevitably sleeps with Lance.  But it’s even with that oldest of cliches, the hero getting into the girl’s panties, that the movie proves its brilliance.  It’s not enough that we see them hop into bed together, but we have a ten minute “seduction” scene where a sunbathing, bikini-clad Djanga gets more and more nekkid while Lance frustratingly eats various fruits (and, it’s implied, “relieving” himself off-screen).  It’s also strongly implied that Djanga has taken Lance’s virginity, because there’s nothing more romantic than losing your virginity to an older and experienced friend of your father’s, I guess. 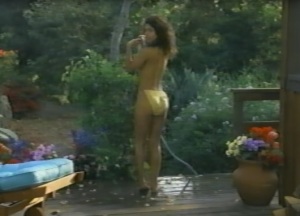 The subtle art of seduction

Unfortunately, Lance’s development into the heir of Bond just isn’t all that interesting.  Admittedly, John Stamos really does an alright job in this role, but even he can’t make Lance’s evolution from a self-absorbed college student into a self-absorbed secret agent convincing.  It doesn’t help that the pivotal moment has Lance being beaten up by two of Ragner’s goons, and then suddenly, just by looking at his father’s medallion, Lance decides, oh yeah, I can beat these goons up with my gymnastics skills!   It tries to be inspirational – there’s even a somber version of the Stargrove theme song (oh yeah, you bet your ass there’s a theme song) – but instead it’s more, “Wait, are we sure that the movie from this point on isn’t just his delusions while his body dies from the beating he got?”

But none of that matters, since the real star of this film is Ragner.  I’m not joking when I say that Gene Simmons really is fun to watch, and not just because of the sheer weirdness of the role (just put aside, again, that someone at some point obviously didn’t know the difference between transvestite and hermaphrodite).  It’s like Simmons is channeling some hybrid of Mae West, Dr. No, and the Kurgan, who is also armed with a deadly, razor-sharp fingernail (!) that their henchmen dread.

If anyone questions your appreciation for this movie, the statement “There’s a scene where Gene Simmons in drag tries to seduce John Stamos” should dispel any doubts.

Oh, right, and Ragner’s mad scientist sidekick is played by Robert Englund, although sadly he basically has only four or five lines.

It’s hard to tell whose wardrobe is more outlandish.

Anyway, the highlight of Simmons’ performance – and the entire film – is a show that Ragner puts on at a biker bar where Lance follows Djanga, who is trying (and failing) to do a bit of undercover work.  It’s not just a biker bar, but one where the costumers ride their medieval-armored-horses-style bikes inside the bar.  I know I’ve mentioned this movie’s Mad Max motif a few times already, but it’s really distracting.  You sometimes have to remind yourself that as far as you can tell the movie’s not supposed to take place after a nuclear war.

It was a different time…

The show itself is just Ragner in full Vegas showgirl regalia prancing to basic musical beats and not so much singing but reciting lyrics like, “It takes a man like me to be a woman like me…YEAH!”  And it is…glorious.

At least there’s a middle-age woman in a Mickey Mouse sweater who seems to be having a blast.

Unfortunately, it turns out Ragner had better luck with his post-apocalyptic biker lounge act than with his attempts at supervillainy.  Although Ragner does get the disc and decides to poison all of Lala-land, ransom or no ransom, the good guys massacre his goons with machine gun fire from a helicopter and after a climactic battle on top of a reservoir Lance dispatches Ragner with his own Finger of Death before letting him plummet into the water below.  As he confronts Ragner, Lance also let loose a couple of homophobic comments about Ragner not being a real man (leading me to think we were supposed to root for Ragner all along).  There’s also some sequel bait, with Djanga remarking that they really should go back and look for Ragner’s body, but alas, the continuing adventures of Lance Stargrove were not meant to be known in this world.

So, yes, the script is full of plot holes and shoddy character building, the action scenes suffer from some of the worst editing this side of YouTube fan-made music videos, and most of the attempts at parodying the James Bond franchise fall flat or are overshadowed by the film’s eccentric stage-setting, but, hell, it’s a unique, enjoyable watch, and isn’t that all that matters?

Well, disagree or not, Velvet von Ragner and I wish pleasant dreams to you all…