Apologies (again) for going off the radar.  As always, summer is a busy time for me, and it hit harder than I expected this time.  I can’t promise I’ll be able to update regularly, since I’ll be out of the country for most of next month and I have no idea if I’ll have regular WiFi access in that time, but I’ll do what I can.

Nightmare Cafe is one of the reasons I’m in this (non-paying) business.  I vaguely remember watching an episode way back when I was a lil’ trash culture anthropologist.  I’m not exactly sure why, but the memory of the show stuck with me, probably because even then I was into horror so the title stuck out for me.   These are the kinds of cultural memories that I feel compelled to pursue, in hopes of unearthing some buried gem.  The fact that both Wes Craven (albeit only at the margins) and Robert Englund were involved really made it worth revisitng for me.  So, bottom line, I really wanted to like it, but there’s only so much that Englund playing a thinly disguised Satan named “Blackie”… 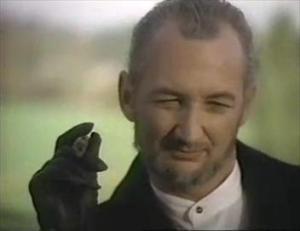 I could watch a 3 hour film that’s just Englund playing the Devil.

Information online about the show is scarce, but from what I pieced together Craven originally wanted to make an anthology series, but decided – with or without studio interference – to have regular characters who interact with the plot.  See, the titular “Nightmare Cafe” is some kind of sentient cosmic being in place form that is dedicated to punishing or rewarding (of course, in the show’s short six-episode run, we see a lot more of the former) individuals.  The cafe’s spokesman is Englund’s character, Blackie, who is strongly implied to be Satan – but not the Prince of Darkness Satan, rather the Old Testament Satan of the Book of Job fame, whose job is to test the morals and ethics of humanity.  The first episode has Blackie test and ultimately enlist as its cook and waitress  two lost souls, a security guard tempted into allowing something unethical to take place in order to save his job, Frank, and a woman who committed suicide out of frustrated love, Fay.  All of this is set up in the first episode, and the show does take a dark turn by making it clear that, no, the two leads do technically die.  However, it’s here that the first show takes its first misstep by resolving everything that went wrong in Fay and Frank’s lives immediately.  Of course, this is long before X-Files–style long-term story arcs became all the craze, but I like to think that even to audiences in 1992 Fay and Mark’s lack of a real story arc looked like a lost opportunity.

But, first, what the show has going for it:  it has a pretty good premise.  Granted it might have worked better as the anthology series Craven envisioned, with the cafe and maybe Blackie as the only recurring elements, but it’s a pretty open-ended concept that could allow for all kinds of tales.  Yet most of the episodes, including the pilot, seem to be aiming for a retro hardboiled detective/film noir vibe, albeit one that’s smoothed down for the uptight sensibilities of early ’90s network TV.  And honestly, while I think the show could have worked if the cafe and Blackie were the only supernatural elements in most episodes, it’s just not that interesting, especially since the cafe itself usually winds up feeling extraneous, a guest star in its own show.

Have I mentioned how awesome Robert Englund is, though?

The big exception was the sixth and last episode to air, “Aliens Ate My Lunch.”  It’s…well, saying it’s tongue in cheek is kind of an understatement.  The cafe teleports (oh yeah, the cafe can teleport anywhere) to a rural community where aliens have been allegedly stealing cows.  Blackie (in one of the episode’s few truly funny sequences, because, you know, Robert Englund) sets up a sleazy tabloid reporter Harry Tambor to cover the story.  Frank’s also revealed to be a huge admirer of Harry because…well, I guess they have to get the main cast invested in the story somehow.  That’s really where the show messed up its premise.  Almost every  story ended up personally involving Fay and Frank in some way;  one story involves Fay’s sister, one has a woman Frank has fallen for, another has the cafe teleport to Frank’s hometown…Frank and Fay just weren’t meant to be much more than just the audience’s connection to the cafe, and it simply feels awkward to see them instead carry the narrative.

Anyway, I forgot to mention, there’s a trope of little people with broad eastern European accents.  Now I’m the sort of person who rolls their eyes at every “progressive” blog post that complains about Game of Thrones for depicting a medieval-style fantasy society that treats women much like real world medieval societies, or will even defend a genocide or rape joke (as long as it’s in “good bad taste”, of course), but there’s just something off about this one, especially since most of the “humor” from these scenes can be summed up as, “They’re little people…with eastern European accents!”  Just imagine Homer Simpson saying that while bellowing laughter and you’ll know what I mean.

Well, the plot is that Harry enlists the trope into helping him fake a UFO sighting.  It’s really at this point that you realize that they could have done this whole story without any of the show’s principals, and then you notice that this show that’s ostensibly about the power of karma and second chances for the deserving has a story about midgets helping a tabloid reporter con a bunch of farmers into thinking a UFO has been kidnapping their cows.  To be fair, things speed up and the Nightmare Cafe clique get dragged into the plot when they’re all menaced by a lynch mob led by the most ludicrously corrupt rural sheriff this side of Boss Hogg.  You can get why the cafe inevitably punishes the triggerhappy, jerkass sheriff, but it punishes Harry too, for some reason.  I mean, sure, he tried to deceive an entire community (for no reason at all, since he already had the story about the very real cattle disappearances, but whatever), but what else did he do?  Make a career out of writing “Batboy Impregnates Paris Hilton” style articles?  Does that really call upon the cosmic intervention of this all-powerful cafe?

What karmic retribution would await a nitpicking nerd?

Okay, okay, maybe I’m being too uptight about what’s obviously meant to be an intergalactic farce.  After all, the little people turn out to be the real aliens (come on, if you didn’t see that one coming, then you don’t watch enough TV!).  Plus the missing cows are okay, their organs not at all removed and dissected to help further some alien plan to invade Earth, and are returned, since they just wanted to go to Mars, or something.  The cafe torments the sheriff and Harry a bit, and the episode – and the series – closes out with a couple of hints about the nature of the cafe and Blackie and the revelation that Fay and Frank can both die (again), all of which, of course, will never be followed up on.

“Aliens Ate My Lunch” managed to simultaneously be a revelation of the show’s potential and an explanation as to why it failed.  On the plus side, it did do a much better job of showing the premise”s potential than the earlier episodes and their fixation on genre formula.  In the negative column, the whole affair is just a hodgepodge of creaky gags and the mildly surreal, which just all seems to hang loosely from the entire framework of the show.  All six episodes are up on YouTube, so I still encourage people to watch because, hey, you got nothing to lose but time.

Still, I have to admit, if you want to see Robert Englund as the Devil, I have to recommend instead the gloriously goofy “Damn Bundys” episode from “Married With Children”‘s last season.