Okay, admittedly, the MOTHER games (best known to North American gamers by the name of the second game in the series, Earthbound) are probably relatively well-known.  They definitely do have a diehard following, even by the standards of gamer fandoms.  Still, at least among casual gamers, I don’t think they’re nearly as well known as other famous JRPG series, like Final Fantasy and Dragon Quest.

Part of this is because, even after JRPGs have delved more into the realms of sci-fi and urban fantasy, MOTHER stands out.  Instead of gunblade-wielding soldiers and magic-users exploring mystic forests or high-tech floating cities, all three games feature kids with psychic powers adventuring through contemporary cities and suburbs, battling such exotic enemies as hippies, “unassuming local guys”, big piles of puke, and half-chicken half-snake monsters.

As you might expect from that choice of enemies, the trilogy has a sense of humor.  Joke items abound, townspeople spout dialogue like “I also helped in the battle.  I threw my slippers at the beast.  Maybe you didn’t notice,” and in MOTHER 2 a.k.a. Earthbound the towns have a cute sequence of names 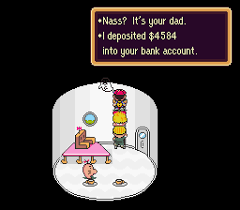 like Onett, Twoson, Threed, and Fourside.  Even the names of the protagonists of the first two games, ‘Ninten’ and ‘Ness,’ are a fourth wall-shattering referential gag.  However, it’s a mistake to think MOTHER is just one big satire/homage to JRPGs.  The games were devised by Shigesato Itoi, a beloved essayist and songwriter in Japan, as a serious storytelling experiment after he first played Dragon Quest and was disappointed by the game’s lack of a story but impressed by the potential of the genre.  Under the surface of the cartoonish graphics and the frequent gags, the games explore the issues of the alienation and loss of community inherent to modern life, how evil arises out of a self-repeating cycle of loneliness and resentment, mankind’s destructive manipulation of the natural world, and the folly of nostalgia.  To give you an idea of how intense the trilogy can get, there’s the fact that the final boss fight of Earthbound was inspired by a film scene Itoi was traumatized by as a child, which he thought was a rape.

If you’re into console RPGs at all, or hell don’t absolutely loathe the medium, the games are worth a try.  Admittedly the first MOTHER is the weakest in the series, and even Itoi admits that the game was

made more difficult than it should have been because part of it was rushed.   Mother 2 and 3, though, cannot be fully appreciated in isolation from each other, and would be considered classics by the standards of any medium.  Itoi sought to show that video games could tell an emotionally engaging story.  He more than succeeded.

Now unfortunately just getting your hands on the MOTHER games is harder than it should be.  Earthbound has yet to be released on the Wii Virtual Console, allegedly because of music rights issues (the bane of so many fans who just want to legally complete their collections), and naturally I wouldn’t be one to say that ROMs of the game are just a quick Google search away (cough).  MOTHER 1 and 3 were never officially released in the US either, but there is a ROM copy of a completed but unreleased American localization circulating around the Internet with the title Earthbound Zero.  Also, of course, you can find a (very good!) fan translation of Mother 3 here.