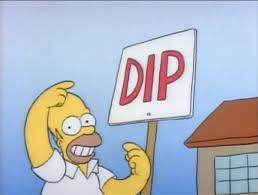 Well, it didn’t take them that long before they made a reference to the Odyssey.

Now I did say that I didn’t want these write-ups to be “reviews” in the strict sense, mostly because I’m more interested in exploring The Simpsons as a cultural phenomenon (but also because I think I suck at reviewing comedy, although in my defense it is one of the hardest elements of entertainment to explain).  However, I should say off the bat that this episode was strange to watch, because – even more so than with the last two episodes of the first season – the jokes were few and far between.  I should add right away that I think this was deliberate, and in a lot of ways the whole episode felt like more of a quasi-dramatic American sitcom than any I’ve watched yet, just with the occasional touches of the surreal made possible by the wonderful possibilities of animation.  In fact, “Homer’s Odyssey” is interesting to watch just because it contains within it a couple of potential “alternate universe” Simpsons series “in utero” – one that had a more realistic and even a dramatic bent, and one that would have been a working-class comedy like Roseanne except centered around a lazy but well-meaning father instead of a hard-working but cynical mother.

“Homer’s Odyssey” gives the viewer a familiar sight:  Homer goofing off at work to the point that he causes a hazardous accident right in front of Bart and his class during a field trip.  From there, though, it’s strange waters.  Homer doesn’t launch a zany scheme or a bizarre career change;  instead he’s so depressed that he’s failed the family and that Marge had to return to her job as a rollerskating waitress that he plans to commit suicide (although he intends to do so in simultaneously the most impractical, hilarious, and painful way imaginable).   When Marge and the kids rush to save him from a watery grave, Homer ends up rescuing them from a dangerous intersection.  This launches him into a crusade to get the town council to set up a stop sign at the intersection, which they do casually and with great apathy, but that doesn’t stop Homer from taking it as a life-affirming triumph.  From then on, Homer dedicates himself as Springfield’s number one safety advocate, finally leading him to confront his former employers at the nuclear power plant.  Mr. Burns gives Homer the diabolical choice of either remaining an unemployed and broke hero of principle or accepting a paying job as the nuclear plant’s chief safety inspector which would nonetheless force Homer to betray his newfound principles.  Much of his own surprise, Homer is stunned by the ethical dilemma, but decides to accept on the rationale that he could actually be a force for safety competence at the plant (which is not what happens in the slightest, but I digress).

We don’t get as scathing and thorough a look at the world of adult employment in the same way we got a look at institutionalized education in “Bart the Genius”, but regardless the episode does touch on a lot of things about modern America.  I said I suck at reviewing comedy, and maybe that’s true, yet I like to think I know enough to realize that comedy is about telling the truth, especially the truths we don’t like to think about.  In the opening act, we already see Bart punished after being set up by the “good, smart kids” Sheri and Teri  (I do wish they were developed more;  I kind of like the idea of them as malevolent versions of Lisa Simpson).  Then Bart, Sherri, Terri and the rest of their class are herded into the nuclear power plant to watch a very thinly veiled propaganda film that cheerfully explains with a friendly cartoon character why the existence of nuclear waste isn’t a big deal.  Homer does deserve to get fired, but in a society where one is defined mostly by their job and their paycheck he is so destroyed as a person he sets out to kill himself.   Another sitcom or drama would have been more explicit about Homer failing his responsibility as a “brreadwinner.”  Maybe it’s meant to be subtle, or lines making it more explicit were cut at some point, but in the end it makes it more depressing and real – especially the point that it’s not the job that’s important and validating to Americans like Homer, but just being able to claim that they get a paycheck at all.  Then there’s Mr. Burns, who makes his debut as Springfield’s leading plutocrat.  Now Mr. Burns hasn’t quite “crossed the line into supervillainy” yet by trying to block out the sun, but he shows no regard whatsoever to actually improving his plant’s safety record;  he only cares about getting the public off his back, even if it means putting the guy who by his own admission  “caused more accidents around here than any other employee and a few doozies nobody else ever found out about.”

However, there are gentler and kinder ideas here too.  Homer’s despair is very sincere, but so is his later enthusiasm for improving the community.  When Mr. Burns plays Mephistopheles by getting Homer to trade in his heroism for a steady income, Homer actually hesitates when Burns orders him to tell his supporters that the plant is safe (when Burns points out that he’s about to turn down a better-paying job for his principles, Homer admits it’s a little “far-fetched”).  There isn’t really a moral here;  it’s pretty obvious even here, and without knowledge of the episodes to come, that Homer is going to revert back to his doughnut-inhaling, accident-prone self.  Hell, he knows this.  And yet we do end knowing that Homer for all his flaws is a fundamentally well-meaning person, and the sense that maybe there is more to life than just wading through a job you can barely stand to just occasionally pick up a paycheck.  It’s that balance between cynicism and optimism that will drive the episodes that come, even here in the first season where Moe’s tavern looks completely different and where Mr. Smiths is black.

Is the “Dumb Things I Gotta Do Today” sticky notepad on the Simpsons’ refrigerator a They Might Be Giants reference?  Or vice versa?

Mr. Burns to Homer:  “You’re not as stupid as you look. Or sound.  Or our best testing indicates.”