My name is Chad, and I’m a Married…With Children fan.

Wait, what am I apologizing for again? True, by the end of its eleven season run, Married…With Children became rightly associated with lowest common denominator insult humor, a hooting audience cheering on sexual innuendos and the appearance of boobs with equal gusto, and the bashing of a a feminist straw(wo)man , but I really would argue that, for just a few years, Married…With Children was a delightfully black-hearted satire of not only the family sitcom, but the cherished ideals of American culture in general. Just look at the characters and the depressing reality they all represent. Al Bundy doesn’t find any fulfillment in either of the centers of twentieth-century American manhood, the career or the family, and is instead convinced he found it in the few years he was a high school football player, the time he was supposed to be looking forward to being an adult. Peg is a housewife who doesn’t see her job as supporting and nurturing her family, but instead as occasionally feeding into Al’s fragile sense of masculinity and identity as the sole breadwinner. Kelly and Bud are not naïve teenagers gently dipping their toes into the world of dating like the Cosby kids, but instead are sex-crazed and street-smart, seeing dating only as a means to an end (sex, of course). Finally, there’s Marcy and Steve, who are introduced as a sophisticated, politically aware young married couple, but not far beneath the surface all they really care about is money and status symbols, with their vaunted political correctness as just another way of proving their superiority over their social and economic inferiors like the Bundy family. (People really do forget that before she was mainly characterized as a left-wing feminist activist, Marcy was explicitly written as a Republican.)

Now do you see why I like this show?

Married…With Children was part of the backlash against ’80s “happy family” sitcoms (which itself was a backlash against the left-wing, politically conscious Norman Lear sitcom, but that’s another story). Just like The Simpsons, though, it didn’t hit its stride until sometime in the second season, when it stopped just mocking sitcom tropes and became a show in its own right. Personally I think the show’s “golden age” runs from seasons two to five. Sure, in that time you do see the show slowly morphing into the live-action cartoon it would infamously become (especially with Kelly Bundy, who went from being a teen punk into the ur-dumb blonde almost overnight), but in that time I also think you have one of the best dystopian family sitcoms out there, funnier and, dare I say it, smarter than our culture’s own memory gives it credit for. So… where did it all go so wrong?

Personally my candidate for the show’s “Jump the Shark” moment came at the end of season six, with a three-part series titled “The England Show,” which featured a surprisingly convoluted story about all male Bundys being under a centuries-old curse, an English village shrouded in perpetual darkness, and a struggle for tourism dollars that leads into a plot to assassinate both Al and Bud. While there was a fun little subplot with Marcy and Jefferson (the character’s second husband, after actor David Garrison left the show) ending up in a S&M club, the whole affair was a bland brew of ancient jokes about England (yes, there’s even a bit about the Queen’s Guard being harassed by obnoxious tourists), slapstick in lieu of the show’s usual misanthropic humor, and silliness that paradoxically snapped around the bend and resulted in the episodes feeling as if they were actually being too serious. However, there’s a more popular candidate among the show’s fans, one that bears the name of Seven… 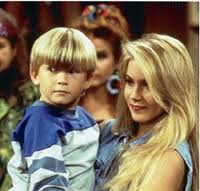 I don’t think there are many better examples out there of just how clueless TV executes and even writers can be than the story of Seven. The “Cousin Oliver,” a character thrown in late in a show’s run just to add some demographic-pleasing cuteness, was already established as a not so proud tradition of American television, but even then I can’t imagine any “Cousin Oliver” being more out of place than Seven in Married…With Children. Even Seven’s introduction at the start of season seven (get it?), where he’s literally abandoned at the Bundy house by Peg’s relatives, is a shade too dark. It doesn’t really help that Al ends up breaking the show’s own “no hugging and no learning” rule by pretending he didn’t manage to locate Seven’s wayward parents to make Peg, who suddenly found her long-absent maternal instincts, happy. It’s the exact mirror opposite of using Winnie the Poo to warn kids about pedophiles.

I have to be fair. Especially now that I have the horror that is Jake Lloyd’s “performance” in the Star Wars prequels burned onto my soul, I can say that Seven’s actor, Shane Sweet, was a good child actor. The problem was that it got obvious really quickly that the regular cast wasn’t getting used to him, and after two episodes centered around him the writers didn’t know what to do with him anymore except use him for the occasional throwaway gag. Now after doing some heavy research (okay, five minutes on Google), I haven’t found out anything concrete about the behind-the-scenes dealings that doomed Seven to trash culture obscurity. Wikipedia claims Seven got a poor audience response; a couple of other sources suggest that the whole idea of bringing in Seven was forced on the writers and they were eager to jettison the character at the first chance. Whatever the case, Seven literally vanished halfway through the season. The only acknowledgment that he ever existed surfaces in the season eight episode, “Ride Scare”…

Personally I prefer to believe that Seven ended up getting handed from family to family, becoming the “Uncle Oliver” to dozens of unseen households. There is a hint that this might have been the case. It makes no sense in terms of chronology, since it comes before his last appearance in the Bundy household, but it definitely works as the explanation for Seven’s disappearance:

MARCY: We were just wondering; do you know where Seven is?

MARCY: Well, let me put your mind at rest. He’s been living with us the past three days. He walked in and wouldn’t leave.

JEFFERSON: He’s been improving slowly. He can’t read, write, or use a knife and fork. But he has learned how to chant “Kill the Bundys” with the other neighbors.

MARCY: If you don’t mind, we were thinking about renaming him ‘Henry’ after my father.

AL: What do we care? Do what you want.